Very Washington DC: A Celebration of the History and Culture of America’s Capitol City by Diana Hollingsworth Gessler
N is for Our Nation’s Capital: A Washington DC Alphabet by Roland Smith, Marie Smith, and Barbara Gibson
What’s in Washington, DC by Laine Falk
aylor-Butler
The US Constitution and You – Syl Sobel
We the Kids by David Catrow
A History of US - the New Nation 1789-1850 by Joy Hakim
Why We Fought - Soldiers of the Revolutionary War by Patrick Catel
Yankee Doodle America, The Spirit of 1776 by Wendell Minor

Fodor’s Around Washington, DC with Kids

Thank You Fund for Teachers

If you are a teacher, you need to check out Fund for Teachers. It is through the generosity of donors we were able to have this wonderful experience. The website for Fund for Teachers is www.fundforteachers.org - Check it out today!
It will be the experience of a lifetime!!!

He's packing his bags for the trip

Chicago at the White House 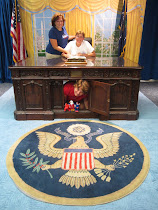 The Oval Office will never be the same

Where Laws are Made